At San-Rock Pool Plastering Inc. we have handled commercial and residential projects on all scales since 1956. Our people know what your project needs, no matter what size it is. Our policy of exclusively hiring forward-thinking innovators and managers means that we always create functional solutions to meet your needs at suprisingly reasonable costs. 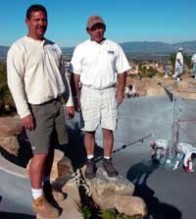 The following article originally written by Bob Dumas in 2003 appeared in a feature for Pool & Spa News. It has been rewritten for the purpose of clarity. The only adjustment that was made is the spelling of “Osorio” which was misspelled in the original article.

Like his name suggests, Ed Rock has had to endure a lot over the years- and not crack under the pressure.

“This business is the school of hard knocks,” he says. “You either learn it, copy it or produce it, or you’re gone. [The business] is always changing. There is something new to look at all the time. Pools just never stay the same.”

The ability to roll with the changes is one of the qualities that has made Rock’s company, San-Rock

“We’re still employing techniques born in the 1930s, and applying the same skills and knowledge to the [new] products coming onto the market today,” says Rock, a 27-year industry veteran. “I think our values and overall pride in our workmanship, and being able to produce something of quality, is what has kept us going.”

Reference photo gallery below; Picture with inset; Rock solid: Ed Rock, left, and his partner Richard Osorio, owners of San-Rock Pool Plastering Inc., have more than 50 years’ plastering experience between them. Reference bellow picutres; Opposite Rock and his crew relax after a hard day’s work in 1980.

Rock began in the trade while still in high school in the early 1970s. He got his foot in the door working for DeMar Baron, on of the industry’s legends and sometimes referred to as the “godfather” of plastering.

Reference photo gallery below; Picture with inset; That was then: San-Rock Pool Plastering has gone through name and leadership changes, but has thrived under Ed Rock’s leadership in the 90s and into the new millennium. Rock and his crew, left, prepare a pool for plastering in 1984; to handle all the needs of the job site, the company truck fleet has included different types of vehicles, including the trusty 1992 pickup, right.

Ref. photo gallery below; Picture with inset; This is now: The crew is hard at work on an upscale infinity-edge pool in Tarzana, Calif. The project includes a meandering river, small bridge and statuary. Left, they’re working on a catch basin; below, workers smooth the shallow end near the pool entrance.

His teachers came from a long line of traditionalists who had been working with plaster in one form or another for decades.

“These were the guys who started out in house plastering,” Rock explains. “That says a lot about what we were taught, which was old school. Basically, [in house plastering] they started you in a closet and when you learned how to trowel properly, they let you come into the hallway. But these house plasterers were the ones making top dollar. They were driving Cadillacs.”

Then, in 1976, Rock joined of the most renowned pool plastering companies, L&N Buratti Plastering. By that time, the pool-plastering industry had begun to develop its own identity.

“A whole generation of finishers had been taught by the house plasterers,” he says. “The [pool] trade had now been pretty much been defined by shoes and sponges and different techniques. Spas were now coming into the realm and things were starting to get a little more exotic, with some very customized work.”

Buratti was doing a brisk business and Rock was with him every step of the way. “It was a big-time operation,” Rock recalls. “He had Anthony and Blue Haven pools and some others, and was doing 250 to 500 pools annually with a sales staff of as many as 25 people. We went everywhere in the valley, out to Thousand Oaks, Simi Valley, and even Valencia.

“That’s unheard-of compared to what we do now. That was definitely the Golden Age of pool plastering.”

The tenacity and work ethic that Rock learned on the job site seemed to translate well to the business-office side of things as well. Within years, he was ready to bring his career to the next level: business owner.

Ref. photo gallery below; Picture with inset; Windfall: Ed Rock says that in ’93, his company was on the verge of bankruptcy, but then the Northridge earthquake occurred and gave the company more work than it could handle.

He got his chance in 1986, when Buratti decided to leave the plastering business to take a job as a salesman for a major pool construction company. The business was up for sale and Rock, along with office manager Sandy Manning, decided to step up and buy it.

Originally, the two thought they’d keep the Buratti name. But they realized that with the former owner now in a high-profile sales position in a related industry, some confusion could ensue. So the two decided to combine their names to create a new company moniker: San-Rock.

“We considered Rock-San, but thought it was a little too feminine for a plastering company,” Rock laughs.

By this time, the pool plastering industry was undergoing some significant changes and San-Rock had to work hard to keep up.

“We were seeing more and more colored plaster, mainly black,” Rock remembers. “With a white pool, we were using water when we troweled to keep from burning. With black, we were trying not to use too much water because we didn’t want to streak it. It was a reverse technique. The new plasterers had to learn that and the older ones had to unlearn some of it.”

“By the mid-‘80s, we were doing 50/50 white plaster to colored plaster. And it wasn’t just black anymore. Now, we had things like chocolate brown and different shades of green.”

Pebble aggregates also were new on the scene, and Rock and his company were one of the first in Southern California to jump on the bandwagon.

“We got the Pebble Tec contract,” he says. “We were one of the first companies to go to Arizona and train in how to apply pebble aggregate finishes.”

In spite of San-Rock’s enthusiasm, pebble finishes did not take off in the Los Angeles area immediately. “It took a good 10 years for pebble to get root in this pool finishing area,” Rock says. “And for us, it was a whole new learning curve.”

As the recession set in during the late ‘80s and early ‘90s, business for San-Rock began to slow. By 1993, Manning was ready to leave the business and sell off her share.

“In 1993, we had a recession and some of the older companies were falling by the wayside,” Rock says. “Sandy was ready to quit.”

Stepping in to buy out Manning’s share was longtime San-Rock employee Richard Osorio, who had been with the company 23 years.

“Richard and I had been around a long time and figured we could make a go of it,” Rock recalls. But financial troubles still plagued the company. That was, until a momentous event took place: the Northridge earthquake.

“The earthquake hit and that gave us the biggest windfall we had ever seen,” Rock says. “One minute, we’re facing bankruptcy and then the next, we had more on our plate than we could handle. Our whole mind-set, though, was that we could do it. And that empowered us to be where we are today. We’ve been told we should have more crews and we say, No, we can do it with what we have."

The ability to do more jobs with less people helps Rock and Osorio- who also works with three brothers, two sons and some nephews- maintain the company’s now-robust bottom line.

“We aren’t a bunch of cocky people,” Rock says with a laugh. “We just make sure the job gets done, and gets done professionally. That’s why we have the reputation that we have. We are a very formidable plastering company now.”

Nowadays, Rock is on the equipment management side of things, while Osorio takes charge of bidding and scheduling. The two are ready to take their business into the 21st century.

“We are both finishers, and that has built our work ethic,” Rock says. “Now we are management. But we sit here and tell our employees how it is, not how it used to be.”

Finding good workers is key to San-Rock’s success and, fortunately, the partners have been lucky in that regard. But Rock says it isn’t always easy.

“Some have it, and some don’t,” he explains. “It’s 130 degrees in that hole and there is no air swirling around, and there you are, pumping away. And you have to get it right the first time. There is no second chance, no going back over it. It’s a team effort, yet an individual effort at the same time. It’s no that way in any other trade.”

Rock pauses and adds, “Once you start shooting mud, there’s no stopping until it’s done, no matter how complicated it gets, no matter how hot it is out,” he says. “That is what separates those with talent and character. It is what keeps you having a job.”

Rock has done his share to help spread the idea of that work ethic. He helmed the National Plasterers Council for two years (1994-96) and served on its board of directors for six years before he decided to rededicate his entire focus to his business.

“I was chairman of the NPC for two years, and it’s like pro baseball players meeting each other,” he recalls fondly. “They all know what I’m talking about, what it takes to stay in business. They all carry the same badge of honor that says they’ve made it.”

With all their attention on San-Rock, Rock and Osorio now are preparing for the next set of challenges that the plastering industry will face.

“The next major hurdle that we will have to face will be environmental,” Rock says. “Every time we turn around and try to do something, the EPA or some city or town has a truck in the street nailing us for something.”

He says government regulations are coming more and more stringent and are threatening to strangle the industry.

“You can’t have a mixer in the street; you can’t run water down the gutter,” he notes. “Every other minute, you have to redesign your company to meet the regulations. We have to appease the lawmakers and still get out jobs done. That’s the biggest challenge we’ll have to face.”

The best tactic for survival, Rock says, is a strong lobbying effort. “The best thing we have going for here in California is SPEC,” he says. “Other states need to have something as strong as that.”

But he believes his company is up to the task of handling this challenge -  and any others that come along.

“We don’t get scared,” Rock says. “It’s a good feeling, having confidence in the guys, the equipment and the products - because five years from now, who knows what is coming around the corner?”

Now adding glass to anyone of our Pebble Finishes*